Project Reads provides individual tutoring to K-3 students in Allen County to help develop and improve their literacy skills. The main focus of PR is bringing kindergarten through third-grade students to grade-level reading to increase the likelihood of high school graduation and future academic success. Project Reads fosters a love of reading among participants through appropriate, leveled, positive reading experiences by providing remedial weekly mentoring, so students are not behind when they enter the fourth grade. 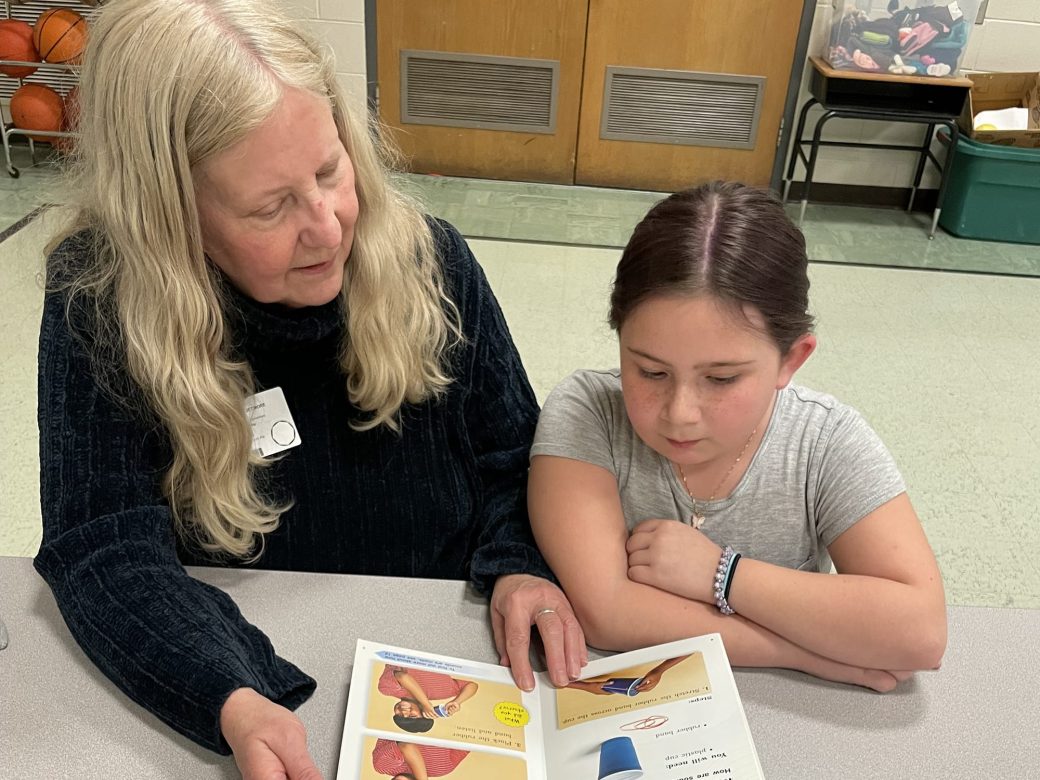 You can positively impact our community by helping students achieve their reading goals.

Project Reads, a program of The Literacy Alliance, has an unprecedented need for volunteer tutors in the 2022-23 school year. Tutors will meet with their K-3rd grade student for one hour each week, from September to May, at schools throughout Allen County. 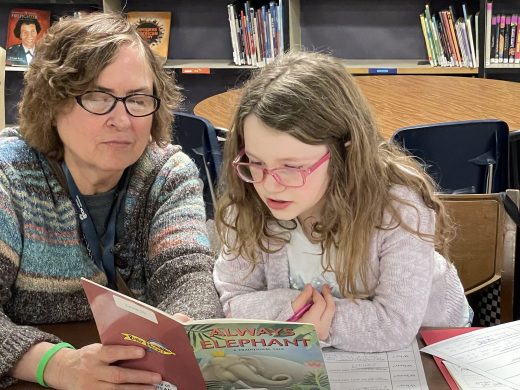 The Magic of 20 Minutes a Day

Did you know that you are your children’s first and most important teacher? It’s true! While this can feel like a rather serious responsibility, it is also the most rewarding part of being a parent! You may be surprised by the magic you can generate by reading to and with your children for just 20 minutes a day.

What’s more, the 20 minutes need not be covered in one sitting. Any combination of chunks of time will work if the total number of minutes equals 20. In these magical minutes, you can:

And…don’t stop reading aloud to and with your children once they become independent readers! Develop a reading tradition that will continue to enrich your children’s education for many years to come! In many families, reading together is part of the bedtime routine, just like brushing their teeth. Children look forward to bedtime, and sharing a good story is a great way to help everyone relax and wind down at the end of the day.

How lucky your children are to have you as their first and most important teacher and a willingness to give only 20 minutes a day to their reading…and their futures. Need some ideas on good books to start with? Check out my reading list for parents below.

Allen County Local Education Fund (ACLEF) began in 1991 with a desegregation lawsuit filed by the Parents for Quality Education (PQE) against Fort Wayne Community Schools. The settlement negotiated between the parties provided funds for educational improvements in the district’s schools.

The Journal-Gazette editorialized on the idea of establishing a Local Education Fund (LEF) in Fort Wayne and sent materials to the Lincoln National Corporation for consideration. A committee of community leaders was appointed (led by Ian Rolland) to investigate the possibility of establishing a LEF in Fort Wayne. With a positive response from this initial group, Lincoln National Corporation formally presented the idea to the community’s corporate council that agreed to initial funding for ACLEF. The agency’s first director, Anne Hoover, was then hired, and the doors were officially opened to “mobilize the community and business support for bold, promising, innovative education programs.” Under Hoover’s direction, ACLEF made an impact by providing mini-grants to teachers, parent groups, and community agencies to advance public school student learning.

The Growth of Project Reads

In 1994, Rosetta Moses-Hill became ACLEF’s second executive director. At that point, the agency shifted toward program provision and focused its attention and resources on an early (kindergarten through third grade) literacy initiative entitled Project Reads (Reading, Early Assistance in Developing Skills). Over the next three years, ACLEF channeled approximately $1,000,000 of public support to the four public school districts in Allen County with the goal of helping all children read at grade level by the completion of third grade. At that same time more than 500 teachers were trained in “best practice” instructional methods for teaching students to read. Overall, more than 15,000 students benefitted from this project during that time period.

In February of 1997, ACLEF launched Phase II of Project Reads by turning its attention and resources to establishing a support network that linked schools, families, and the communities to support children learning to read. Eighteen literacy sites were opened the first school year, where community volunteers tutored K-3rd grade students in reading.

The Development of Parent Literacy Enrichment and ITT Engagement

In 1998, ACLEF developed a curriculum and implemented a countywide Parent Literacy Enrichment (PLE) program. The program initially targeted the parents of first grade Reading Recovery students. The objective of the program was to assist parents in understanding how they could work best with teachers to support their children in learning and maintaining the skills necessary to read at grade level.

In 1999, the program was extended to the parents of second grade students, and the curriculum was modified to include writing development, a skill reciprocal with reading.

In the late 1990s, ACLEF began working with ITT to provide funding to support innovative math, science, and technology programming in all public schools in Allen County. The ITT Excellence in Education Awards Program provided classroom grants to support teachers in their efforts to teach math, science and technology.

During the 2001-2002 school year, curriculum was developed to offer a kindergarten-level training program for parents. Soon thereafter, ACLEF also offered a special one-night class focused on best literacy practices that parents can use with their children to the parents of children in the Summer Clubhouse program.

In 2000, ACLEF was named as a lead participant in a $5 million three-year community-wide initiative funded by the Lilly Endowment. This initiative (CAPE Grant) was entitled Everybody Reads. ACLEF’s portion of this grant was to expand Project Reads by increasing participation in the program and adding significant new in-school services such as teacher development (which was called Balanced Literacy). Balanced Literacy classes were offered through local universities.

During this time, ACLEF’s growth was enhanced through an AmeriCorps grant. This grant allowed additional staff to be hired to help foster the growth of the agency’s programming.

This initiative also brought ACLEF into a close, collaborative working relationship with other community service and non-profit organizations whose common goal was to drive all of Allen County to embrace the importance of early childhood literacy. The Everybody Reads initiative also opened ACLEF’s services up for the first time to non-public schools thus changing the face of ACLEF to a true county-wide agency that could now service the early literacy needs of all young learners across Allen County regardless of how and where they were being taught.

While this was intended to be a three-year initiative, unspent funding was available to the agency into 2005. These unspent funds became the main source of funding for the agency and allowed the agency to purchase large quantities of books to grow inventory during the 2004-2005 time frame.

In July 2002, Brian White became the agency’s third executive director. At this time, ACLEF’s two main programs, Project Reads and Parent Literacy Enrichment, continued to grow as true county-wide programs. ACLEF’s focus from serving only center city children to all children across Allen County became clearer. At this time ACLEF also shifted its focus from providing food to families as an incentive for program completion to the provision of grade-level appropriate books as an incentive.

In July 2004, ACLEF legally changed its name to the Allen County Education Partnership (ACEP). This name change occurred in part as a response to the agency’s change from a granting agency to a service provider and because the agency now served all children and not just children in public schools as it truly no longer qualified as an LEF whose focus was only on public school children.

Through the ensuing years, ACEP continued working closely with local school districts to hone its programming, ensuring that it continued to reach those children most in need of early literacy assistance.

After a couple of years of planning, ACEP officially became the lead agency in the Learn United initiative in 2009. Through this initiative, ACEP worked to establish an in-school literacy tutoring program that would complement the after-school Project Reads program. Due to changes in the community, ACEP parted with the initiative in early 2011.

Joining Forces with The Literacy Alliance

On June 23, 2021, the Allen County Education Partnership board of directors voted to dissolve the organization and transfer its assets to The Literacy Alliance, whose board voted to accept those assets and pledged to make a good faith commitment to keep Project Reads in its current form with one-to-one mentoring. By assuming Project Reads’ assets, TLA will ensure continued early literacy services for kindergarten through third graders. This became official as of September 1, 2021.

Project Reads still aims to reduce the number of students who do not pass the IREAD-3, a reading assessment administered to all third graders in Indiana. The need for Project Reads has always been clear, but that need has become more evident as a result of the pandemic. New data shows that learning loss due to unstable learning environments in the pandemic school year and beyond is significant. Intentional and specifically trained literacy volunteers work to help schools mitigate any residual cumulative reading loss.

As the 2022-23 school year begins, Project Reads is back to pre-pandemic service levels, with plans to be in 18 sites across all four Allen County school districts and one parochial school.